Yesterday was a bit of a revelation. The other day (yesterday? Who knows? My memory has more holes than Swiss cheese) I was talking about how the Internet is such an enormous distraction, and one of the terrific things about the old dial-up modems was the process of signing onto the web was such an irritating process that it wasn’t a big deal to shut it all down when I had other things to get done and couldn’t be distracted. So, yesterday I did precisely that: I closed down both browsers when it was time to work, and guess what? Not only did I get some work done on the Scotty, I got the page proofing for Survivor’s Guilt and Other Stories form filled out, cleaned the apartment (the living room still needs work) and made shrimp creole for dinner. I also wound up watching the final three episodes of Titans last night (which were quite excellent, I might add), and read some more Walter Mosley before going to bed. So, this morning I am going to finish writing this blog post before cleaning out my email inboxes, after which I am going to shut down my browsers and get to work. I want to finish cleaning the living room, have some dishes and laundry to do, some minor touches need to be done in the kitchen, and then I am most likely going to make potato leek soup for dinner in the slow cooker.

Pretty cool, huh? I felt really good in getting that work on Scotty done yesterday, and I think it’s good work. I am most definitely pleased with myself. I also need to make a list of things that need to get done this week.

I have to say, shutting down the Internet on my desktop was a pretty genius thing to do. I couldn’t believe how much free time I had yesterday to get things done. I will admit I occasionally checked my phone every few hours or so, and last night while I was watching television I also pulled out the iPad occasionally, but over all it was terrific. I had already, years ago, came up with a new rule to not answer emails over the weekends (emails always beget emails), and limiting the Internet is actually kind of genius.

I was very pleased with the entire first season of Titans. This is how you launch a television series about a super-hero team; a continuing story arc where you get to know the characters as they work together or meet each other, with back story episodes mixed in here and there to deepen and enrich the viewer’s understanding of the characters. The actors are all good in their roles–they are gorgeous and can act–and the main character arc–the growth of Dick Grayson from sidekick Robin into himself as an individual rather than what Bruce Wayne/Batman wants him, has been grooming him, to be–is very compelling, as is trying to solve the mystery of who amnesiac Kory is, and who Rachel actually is and what the source of her power is. Kudos for an excellent first season.

Friday night I watched two episodes and resisted bingeing the rest…and discovered that the pilot for the Aquaman series the CW had considered doing during the run of Smallville was available on DC Universe, starring the incredibly handsome Justin Hartley as Arthur Curry/Aquaman. (He now stars on This Is Us.) The pilot is terrible, really terrible, and I can see why the CW didn’t pick it up. Hartley went on to play Green Arrow on Smallville, which was how I came to be a fan of the handsome actor with the phenomenal body. But as I watched Titans, the actor who plays Hank/Hawk (of Hawk and Dove), Alan Ritchson, looked familiar. Last night it hit me: he played Aquaman on Smallville! After the Aquaman pilot failed and the show cast Hartley as Green Arrow, when they brought in Aquaman he was played by Ritchson, who now plays Hawk on Titans–and does a great job of it, too. And of course later, when Greg Berlanti (also involved in Titans) rebooted Green Arrow as Arrow, he cast Stephen Amell as Arrow rather than spinning Hartley off, which also worked. So, how confusing is all of this? Pretty confusing. Hartley played Aquaman and then Green Arrow; Ritchson played Aquaman but now plays Hawk; Amell now plays Green Arrow. Whether Titans will cross over with the other DC Universe shows on the CW–Arrow, Flash, Legends of Tomorrow, Supergirl–remains to be seen.

But I have to give it up to this rebooted television DC Universe. And this isn’t even getting into the film DC Universe.

The nice thing about the DC Universe subscription is you can also read comic books on the app for free, so I don’t have to buy them anymore. Also a really good thing, because I still haven’t read all the comics on my iPad that I’ve bought. There’s never enough time, quite frankly.

All right, on that note, Constant Reader, it’s back to the spice mines. Have a lovely Sunday.

Saturday morning. After my morning coffee,  I’m going to run some errands, and then I am going to figure out what time to drive out to Elmwood to see Wonder Woman–shooting for late afternoon/early evening; that way I can get some cleaning and revising done. I’ve not done much revising this week–which is shameful (there is some harsh and ugly truths there about the need for actual contractual deadlines, isn’t there?), and so my goal is to get back on track with all of that for this weekend. I want to get another three or four chapters revised, as well as the second draft of “Quiet Desperation” finished this weekend, so I can move on to revising another short story. I’ve also started a new draft of the eighth Scotty novel, Crescent City Charade, which I am hoping to get finished by the end of the summer (Labor Day is the goal). I absolutely HAVE to get these revisions finished by the end of June, because I want to spend the summer querying agents. I honestly believe this WIP is my best work, and could be an important book.

Whether that proves to be the case or not remains to be seen, of course, but here’s hoping.

The Lost Apartment is a mess, and has been for quite some time. I can’t remember the last time I did the floors, quite frankly, and it’s getting kind of ugly down there, honestly. I mean, our kitchen floor needs to be redone–tiles have come up–which kind of makes it hard to make it look nice anyway, but that’s no excuse for not cleaning, you know? My mother would be so ashamed.

So, I am going to, as soon as I finish this cup of coffee, start straightening and cleaning up down here. It looks like it’s going to rain all weekend, so I am not going to bother with the windows (which are also long overdue for a cleaning; although I could do the inside. Hmmmm, that could be a plan, actually) and definitely work on these floors. There’s some filing to do–isn’t there always–and some other organizing I need to do, but if I buckle down and stay focused (and make a fucking list) I should be able to get through everything before it’s time to go see Wonder Woman.

I’m really looking forward to seeing the movie. Wonder Woman was always one of my favorite comic book superheroes (although when I started reading DC Comics, she’d given up her powers somehow and was running a clothing boutique and dealing with social issues and was a modern feminist; in retrospect, it was one of the stupidest reboots in DC’s long history of rebooting their characters); I loved the historic Amazon character, and the rebooted non-powered Wonder Woman/Diana Prince character was more of a detective, solving crimes and trained in martial arts. Around the time the television series starring Lynda Carter started, the DC rebooted her again and made her an Amazon princess with her powers again. And the TV show was amazing. Rewatching it now shows it up for its low-budget special effects and bad writing, but Lynda Carter embodied the part so beautifully that she became iconic–and I’ve been a lifelong fan of Ms. Carter. Paul and I stopped watching Supergirl during its first season, before Lynda Carter joined the cast as the president, so I’m sure at some point I’ll go back and binge the series. (I’ve also always been a fan of Supergirl–who also went through an incredibly stupid reboot in the 1970’s; complete with new costumes and a loss of some of her powers–sometimes she had them, sometimes she didn’t; they came and went because of some kind of Kryptonite poisoned drink she was tricked into imbibing; then was killed off during the Crisis on Infinite Earths, and then was brought back as something completely different after Superman was killed off in the early 1990’s. It’s really hard to keep track of all these shifts and changes in DC continuity/universes.)

Interestingly enough, now as I reflect on my fandom of both Wonder Woman and Supergirl, I realize how I’ve always been drawn to fictional depictions of strong women–from Nancy Drew to Trixie Belden to the Dana Girls to Cherry Ames to Vicki Barr to Wonder Woman to Supergirl to Lois Lane (who used to have her own comic book, detailing her adventures as an investigative reporter, which I also loved), to real life women who defied the traditional role of women in our society, like Katharine Hepburn and Bette Davis and Joan Crawford. I’ve certainly always enjoyed reading fiction by and about women; from Charlotte Armstrong to Phyllis Whitney to Victoria Holt to Mary Stewart to Judith Krantz and so on and so forth. Do people still read Rona Jaffe? She was another favorite of mine from the 1970’s. Taylor Caldwell, Evelyn Anthony, Jean Plaidy, Helen MacInnes, Daphne du Maurier, Patricia Highsmith, Shirley Jackson–I’ve always read and enjoyed books written by women. (This is not to say I don’t enjoy books by men; I always have, but at the same time there is a certain style of testosterone driven male novel, complete with angst, that I simply cannot abide, and the crime genre is riddled with them. I recently joked that I wanted to write a noir set in the strip clubs in the Quarter and call it Girls Girls Girls…you get the idea.)

And there are so many wonderful women writers publishing today: Sara Paretsky, Laura Lippman, Sue Grafton, Megan Abbott, Alison Gaylin, Alafair Burke, Alex Marwood, Lisa Unger, Jamie Mason, Wendy Corsi Staub, J. M. Redmann, Kristi Belcamino, Carrie Smith, Sara Henry, Ellen Hart, Donna Andrews, Dana Cameron, Toni Kelner (Leigh Perry), Carolyn Haines, Catriona McPherson, Lori Rader-Day, and Rebecca Chance–just off the top of my head; my TBR pile is filled with books by women, and there are so many wonderful women writers I’ve not gotten to yet, like Lisa Lutz and Shannon Baker and Jennifer MacMahon and Karin Slaughter–the list goes on and on forever and ever, amen. And this is just crime fiction/thrillers…I’ve not even touched on horror or scifi or fantasy or so-called ‘chick-lit.’ (Which reminds me, I really want to read some more Liane Moriarty, and I’ve not read any Jennifer Weiner…sigh.)

There’s just never enough time….and speaking of which, it’s time for me to head back into the spice mines.

Here’s a Saturday hunk for you: 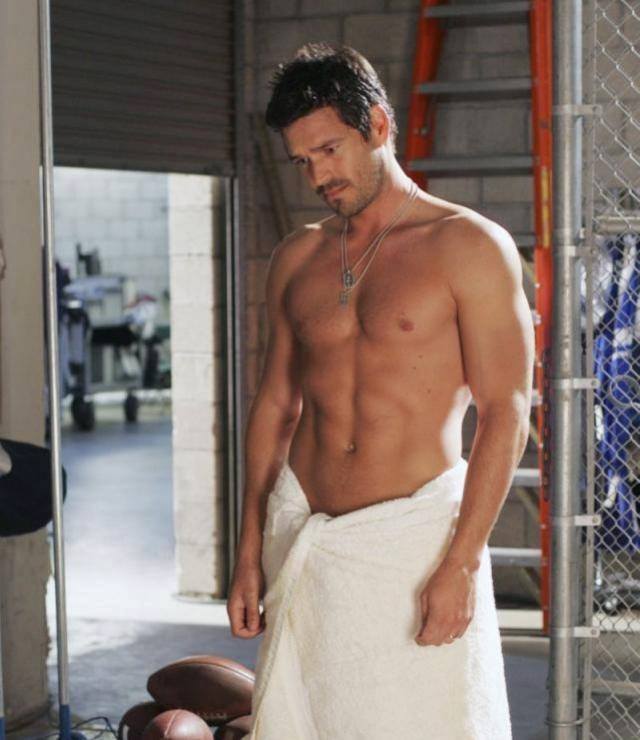