Saturday morning and it’s chilly in the Lost Apartment; the sun is out and there’s condensation on the windows. Scooter is perched next to my keyboard, staring out the window, watching Kitty TV; I’m not sure what’s on, but he’s fascinated. It rained brutally yesterday with flash floods and so forth throughout the city. It had been a few weeks since it had rained, but there it was; a long overdue downpour. I managed to get home before it got too terribly bad, and spent the evening organizing and cleaning out files, rather than actually writing. I just didn’t feel like I was in a writing place, and so I decided to go with that but demanded of myself to complete this tedious chore that I hate doing so much.

Essentially, it meant cleaning out old files that no longer need accessibility–old book contracts, royalty statements, and even file folders of old short stories now published, etc.–out of the file cabinet and boxing them up to put in storage. This, naturally, has freed up space in the file cabinet for files to be moved into from the ACTIVE files. (Yes, I am aware how insane this all sounds; but I have two small file holders on the small bookcase next to  my desk, where I file new ideas, articles that might lead somewhere, and new stories that I have started or are not immediately working on; on my desk itself I have a metal file rack that contains the folders of what I am immediately working on. I know, I know, but it makes sense to me, and it works for me.) I also gathered all my non-fiction research on being queer in America, as well as my journal (materials for my memoirs, should I ever write them, or at least personal essays about being gay)  to collect in one place: a lovely box that is currently sitting on my kitchen counter, preparatory to going into the storage space. While doing all of this I ran across several of my old journals. 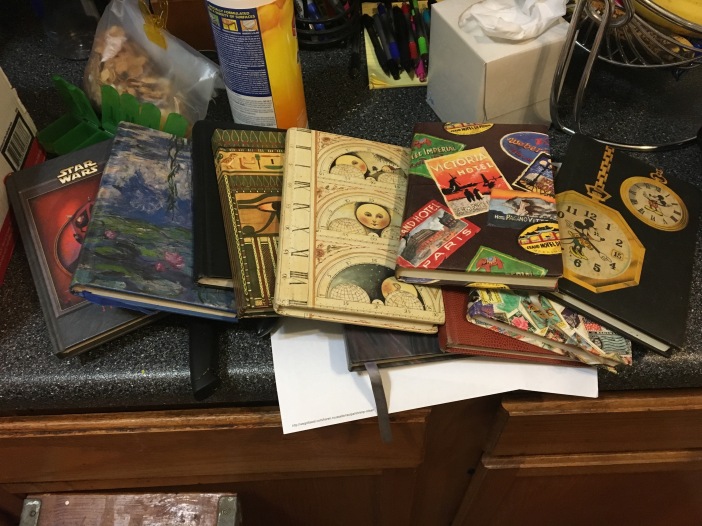 These are some of my journals–I suspect some of them have been lost to time, through moves and so forth–but the oldest is from 1994; the most recent of these is from 2003. I started my blog in late 2004, and I suspect that’s approximately also when I stopped writing in these. It was an interesting experience, idly paging through these before placing them in the box; some of the earlier ones are from, of course, when I worked at the airport. That’s when I started carrying one with me at all times; I always had a pen, my journal, and whatever book I was reading at the time with me when I was at the airport, on an airplane traveling, etc. The ones from my time at the airport are all written in green ink; because we used green pens at the airport for everything. I wrote on my breaks, I wrote when I was in between flights at the gates, I wrote while I was waiting to board an airplane, I wrote while on airplanes. Later, I wrote between clients at the gym, or while waiting for it to be time for an aerobics class I was teaching; I wrote in coffee shops. There are scenes in these journals, that eventually made it into Murder in the Rue Dauphine or Bourbon Street Blues; there are the openings of short stories I’ve written, scrawled in long hand on these pages. I’ve even found things like when I first had the idea for the book that became Dark Tide many years later; places where I worked on developing characters or plots of themes for the book or story I was currently trying to work on and/or finish; there are also personal moments, moments of frustration or joy or happiness, all recorded in my neat, broadly looping handwriting. Starting to keep another one of these this year has been enormously helpful for me in many ways; it was lovely to reconnect with the bound journal format. (I actually need to buy a new one; I am hoping they have some at Tubby and Coo’s, where I am going this afternoon for Bryan Camp’s book-signing for his brilliant debut novel The City of Lost Fortunes)

This morning I need to finish packing up these boxes, and perhaps work on getting some of the other files moved; it is literally astonishing how much paper I have. One entire file cabinet drawer is filled with short stories and novels-in-progress that I stopped working on at some point, folders with ideas jotted down, characters and names and ideas for stories and books. All this effort, besides keeping me from actually writing anything, is an attempt to declutter my workspace as well as to make it more organized; I had an idea for a story for an anthology call I saw recently, and I knew I’d written a draft of an appropriate story (possibly) years ago–which meant it was probably in the file cabinet and I should probably drag it out to see if there was anything written in it that was usable. The need for this file made me see how desperately flawed and out of control my filing system had actually been allowed to become so as it thundered and lightning lit up the sky and the yard filled with rushing water I started working grimly on fixing this mess.

I did find the file, by the way.

I need to go to the grocery store at some point this morning as well; I could wait to do it tomorrow,  but between the cleaning and the filing and the going to the book signing I don’t see any window for actually writing, so rather than putting it off till the morrow I should probably do it today, since today is going to be shot on that score. Or maybe it won’t be; I may be able to get some things done today on the writing. My writing/editing goal for the weekend is to read “Burning Crosses” aloud and be finished with it; to finish revising Chapter Two of the WIP, and possibly read all fourteen chapters of the Scotty book and see where things sit with it, preparatory to getting back to work on it as well.

I also want to dive into Alex Segura’s Blackout, which is getting rave reviews everywhere.

We started watching the second season of Thirteen Reasons Why last night, and I have to say, I am not overly impressed with it. The first two episodes were terribly uneven–the third began to pick up steam again–but the device of having Hannah appearing as a sort of ghost to Clay isn’t working for me and is something that I hope is used either sparingly as the show moves on, or is eradicated completely. We don’t need Hannah appearing as Clay’s conscience, nor do we need her at all. It derails the show, frankly; them having conversations is, to quote youth culture of some time ago, kinda whack.

So far, we’re disappointed with it. but not so much so that we will stop watching.

That, however, could change.