It’s Friday, and I have the morning off in order to once again have an eye appointment. Here’s hoping nothing goes wrong with that one, right? Oy. But…it’s also Friday. Hooray!

I managed to finish the first draft of my story “The Carriage House,” clocking in another 2500 words or so; the story in first draft now sits at about 5350 words, most of them written over the last two days. I had hoped to finish my Italy story yesterday as well, and get started on another Scotty chapter, but alas, that was not to be. It also occurred to me last night that I’ve written a lot of short stories so far this year; certainly more this year than I have in any previous year, and it’s early March only. Three were written to submit to anthologies, and the others were simply written because I wanted, felt the need, to write them. I’ve written a Chanse short story, which is also a first; and that’s kind of cool. I know how to fix it; I actually know how to fix all of the stories that now sit in a first draft form, which is also a first. Usually I have nary a clue on what to do with these stories once the draft is written. I also know how to fix another story that’s just been sitting in my files for years; mayhap I shall work on fixing it this weekend, who knows? I also can’t help but think that all these short stories are happening now because of the Short Story Project.

So, today it’s off to Metairie for the eye doctor, then it’s to the office for testing, and then it’s time to come home (it’s my short day) and hopefully to the gym for a workout. I’d like to spend the evening cleaning the Lost Apartment as well, so I can spend the weekend writing (other than the errands that must be run tomorrow).

Well, I never finished that, did I? Nope; my bad. Before I finished it was time to go, and off I went. I am now home, it’s later on in the day, and I’m a bit tired.

I didn’t want to get up this Saturday morning, but I did–I have things to do today, errands and such, and must go to the gym–so I’ll sleep in tomorrow, which is when we lose an hour of sleep anyway. It’s not light out; it’s cloudy. I am not sure if that means it’s going to rain or something, but whatever it means…I’ll be out there dealing with it soon enough.

I also have some chores around here that I have to complete before heading out to face the day.

I am going to take today off from writing, despite being behind. I am very pleased with “The Carriage House,” as I said earlier in this missive, and I am relatively pleased with the Chanse story. It needs some more work, of course–there’s at least one scene missing that I need to put into it, as well as some more layers–but overall, I am quite well pleased with it, as well. I am more pleased, I think, that I’ve written a private eye story; I may write more now that I know I can actually do it. I doubt if I’ll do Scotty stories–there’s just way too much backstory necessary–but I have an idea for another Chanse story, this time set on the LSU campus in Baton Rouge. Oh! The title just came to me! “Once a Tiger.” I kind of like that. (The Chanse story needs not only revision but a new title; “Glory Days” doesn’t work with the story as it wound up. I originally set it at a reunion of sorts, but wrote that out of the story.) I do want to finish my Italy story, and perhaps work on a revision of either “The Weight of a Feather” or “The Problem with Autofill.” I also would like to get another Scotty chapter finished. We’ll see.

I’ve done quite a few short stories this year, as I mentioned earlier; even more than I originally thought I had done. I am thinking more about placement for said stories; I worry that some of the better paying markets–there aren’t many of those any more–won’t want a story with a gay male lead, even if the story itself isn’t particularly gay; “The Carriage House,” while not having anything particularly gay about it’s story line, also has gay character and involved murders of gay men. And you know, that’s really the thing about writing gay stories and novels; when you get rejected, when you don’t get reviewed or recognized–you always wonder. Was it really not good enough to get published/reviewed/recognized, and was it because of the gay factor? If I assume it’s the gay thing, am I not being honest with myself as a writer and rather than accepting that it needed more work or wasn’t good enough, am I using that as a crutch/excuse?

All right, back to my chores. Here’s a Saturday hunk for you. 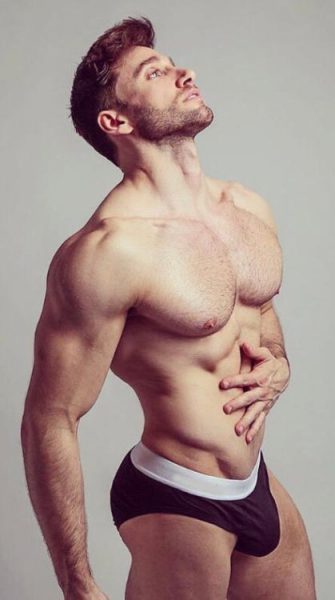