Adam Rippon is going to the Olympics as the first openly gay American figure skater to compete in Olympic history. 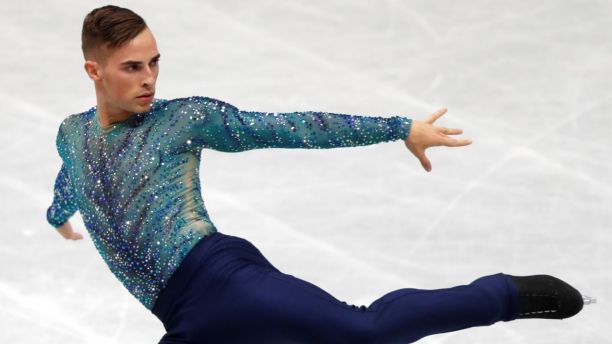 Let’s not be coy, though–there have been plenty of gay male figure skaters throughout the history of the sport–but most came out (or were outed) after their Olympic-eligible careers were over. (And Adam Kenworthy–not a figure skater– is also out this year, but he wasn’t out when he competed in Sochi.)

One of the things that has always fascinated me about figure skating is the contradiction evident in its gender roles. Men are, while being artistic, also supposed to read as masculine and not feminine; likewise the women (it’s still called Ladies’ Figure Skating, for the record) are supposed to be feminine, graceful and lady-like, rather than athletic; a feminine and graceful skater would always win over someone who wasn’t as graceful but was more of an athlete than a ballet dancer. This bipolarity at the heart of figure skating kept gay male skaters deep in the closet, particularly if they were American men; Russian men had no problem with wearing gloves and performing ballet on the ice–but at the same time, those Russian men (Viktor Petrenko, Alexei Urmanov, Ilia Kulik, Alexei Yagudin, and Yevgeny Pluschenko won every Olympic gold medal between 1992 and 2006) clearly were athletes, flying across the ice in footstep sequences with their feet and blades changing directions and edges as rapidly as a machine gun fires; dizzying fast spins with beautiful positions; and of course, landing quad and triple jumps with the greatest of ease, and almost always on the beat of the music they were performing to.

There was also an unspoken understanding that being openly gay would hurt a skater in the marks, which were often subjective, frequently unfair, and, according to the ISU, above reproach. Rudy Galindo was the first openly gay American skater to win US Nationals in 1996, and went on to win a bronze medal at worlds that year; the next openly gay skater to win the US title was Adam Rippon, some twenty years later. Between them was flamboyant Johnny Weir, who didn’t come out until after his Olympic-eligible career was over… (I might add that, despite being US champion and a world medalist in 1996, the USFSA chose not to send Rudy to any of the Grand Prix events the following season; a clear indication to him that his Olympic-eligible career was over, and he went pro.)

Rippon, incidentally, finished fourth at the Olympic trials this year, but was chosen to go to the Olympics anyway; selected over a heterosexual skater who finished with the silver medal. Have things changed with male figure skating since Rudy’s big win in 1996?

As a long time figure skating fan, I’ve always wanted to write a book about a gay figure skater. I did in Jackson Square Jazz, with the character of Bryce Bell, a US Olympic hopeful who is introduced to the reader as someone a very drunken Scotty picked up at a French Quarter gay bar, only to see him competing that same night at Skate America, being held in New Orleans for the first (and clearly fictional) time. (As a joke, I also had Bryce become the first skater in history to land a quad axel; this has still not happened in real life, and may not ever happen.) But Bryce’s skating was relatively unimportant to the story and plot of the book; although his remaining closeted as a skater was.

I never felt that I was able to truly explore the issues of being a gay, Olympic-eligible, American figure skater in the book; Bryce was a supporting character, and the story wasn’t told from his point of view (I’ve been tempted to bring him back, but can never figure out a way to do it organically; just forcibly grafting him onto a story because I want to just feels wrong).

Ironically, Adam didn’t win Nationals until after he came out. Coming out–and being able to truly be himself for the first time–paid off. He’s a much better skater than he was before; but I do remember thinking at the time he came out, well, you’re never going to win nationals now. But by embracing himself for who he really is, he changed; he found a look and costumes that work for him–he used to have this mop of blonde curls–and his short program this year, to what Paul and I immediately recognized as a gay techno dance remix from back in the day–is one for the ages.

So, does the central premise of the noir figure skating novel I’ve wanted to write–a skater being forced into the closet and not allowed to be himself so that I can explore not only the dynamics of what masculinity is but the class issues inherent in figure skating (I still haven’t posted about my thoughts on I Tonya, which have everything to do with femininity vs. athleticism and class); the masks skaters are forced to wear in order to play the game and get the marks they deserve to win–does that premise still exist today? As far as I know, Adam and Rudy are the only American skaters to come out and skate at the Olympic eligible level; are there others? Is coming out still a risk to your career as a male skater?

And on that note, back to the spice mines.