At the beginning of this year, I decided to start something I called The Diversity Project, whose intended purpose was to read more books and short stories by diverse authors. I’ve gone back and forth on this; the sense that announcing such a thing was, in a way, virtue signaling of the most hypocritical kind; why was it necessary to make such an announcement, or to continue, once it was made, even talking about it? Shouldn’t I have been reading diverse authors all along, and making the corrective to my reading habits that shouldn’t have been necessary in the first place isn’t something that is worthy of praise in the first place. We should all be reading diverse authors, and it isn’t something that we should have to make a point of doing. We shouldn’t even have to think about it, frankly; it should be automatic.

I have always read more female than male writers; my reading aesthetic has never been geared to the straight white male experience. But just reading more women than men was also not something I have ever had to make a conscious effort in order to accomplish; I always have read more women than men traditionally. My shelves are crowded with female names: Hilary Mantel and Laura Lippman, Megan Abbott and Alafair Burke and Lori Roy and Alison Gaylin, Donna Andrews and Elaine Viets and Rebecca Chance, Charlotte Armstrong and Mary Stewart and Margaret Millar, Gwen Florio and Catriona McPherson, J. M. Redmann and Cheryl Head and Lori Rader-Day and so, so many others.

But while some of those women might me lesbians, none of them are women of color.

And that’s kind of terrible, isn’t it? Sure, I’ve read Toni Morrison and Octavia Butler and Maya Angelou and Alice Walker, but that’s kind of it for women of color. No Asians, no Latina/Hispanics, and outside of Butler, the rest all would be considered literary authors.

I also realized earlier this year, at the start of the project, that I’d never read Walter Mosley; so the first book in this project with Devil In a Blue Dress, which was truly terrific–I’m looking forward to reading more Mosley.

So, with this corrective in mind, this reboot of my brain and unscrambling and exposure of unconscious bias, I decided to read Steph Cha’s debut novel, Follow Her Home. 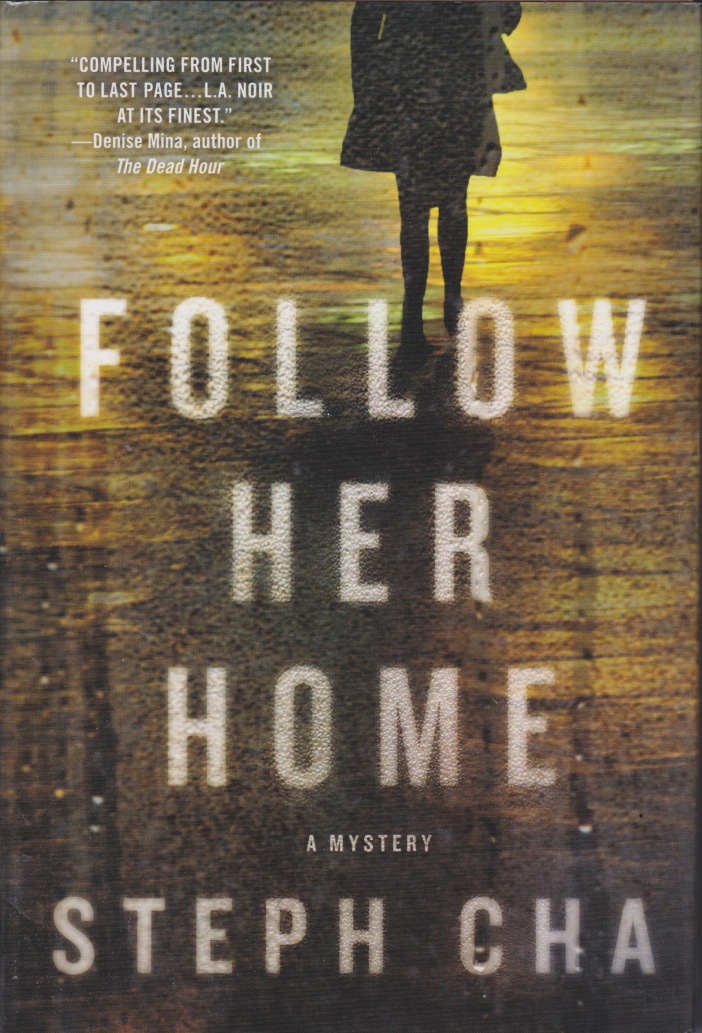 It was about ten o’clock on a Friday in mid-July, the Los Angeles night warm and dry, the only wind rising from the whoosh and zoom of traffic on Rossmore. I was wearing a slinky black dress, black patent leather platform pumps, silver cascade earrings, and a black lambskin clutch. I was perfumed, manicured, and impeccably coiffed. I was everything a half-employed twentysomething should be on the sober end of a Friday night. I was calling on an open bar at Luke’s new apartment, ready to spend a little time and respectability on a blurry and colorful evening.

Luke’s place was in the Marlowe Apartments in Hancock Park, a complex towering pretty as a castle just north of the Wilshire Country Club. It stood less than two miles south of Hollywood and Ivar, where its namesake found his vocation. But the Marlowe was a luxury apartment more likely to house the rich degenerates of Chandler’s novels than his wisecracking private eye with a heart of noir gold.

Follow Her Home is Steph’s debut novel, and it’s quite excellent. It’s the first of three novels about her character, Juniper Song, a Korean-American daughter of a single parent with a younger sister. Juniper has graduated from college and is making good money as a highly paid and highly sought after tutor; the book begins with her attending a party at a childhood friend’s apartment, and being asked to ‘see if she can find out whether her friend’s father (a partner in a major law firm where the friend also works) is having an affair with a young Asian-American woman at the party who also works at the firm. Juniper is a huge fan of Chandler, as you can see in the excerpt above, and Juniper also uses her knowledge of Chandler’s novels and how Marlowe conducts his investigations to kind of LARP as a detective. But once she follows the young woman home from the party, Song finds herself involved in something even more dangerous and insidious than she could have imagined in her wildest dreams.

Cha writes in the same hard-boiled style as Chandler, emulating it while giving it a fresh face and voice in Juniper Song and reinvigorating it with a modern flair. The book–the first in a series and therefore required to give a lot of backstory on the character–is done with an interesting structure; bouncing between the modern day and Song’s current investigation to the past, when she first put on her sleuthing shoes and investigated her younger sister’s private life. Saying anything more would be spoiler-ish (always an issue when you’re writing about a crime novel), but this structure makes Song even more relatable, likable, and adds layers and textures to her character that simply focusing on the present day wouldn’t do. It’s masterful, and it would also be incredibly easy for the parallel stories to not be of equal force and value.

I greatly enjoyed reading this, and am looking forward to not only reading the next two books in the series but the stand alone being released this October–Your House Will Pay–also sounds pretty fantastic.