Saturday morning and I feel great. If you think that means I slept well last night, you would be correct in that assumption.  It’s amazing what a difference it makes; those of you who have no trouble sleeping at night and can get amazing rest every night? You have no idea how lucky you are, and how much I envy you.

Today I have errands to run, a house to clean, a workout to do; as long as I stay motivated I can easily get all of these things done. I also have writing to do–I want to finish “A Whisper from the Graveyard” this weekend, and I also want to finish making my notes on the Scotty book, at which point I need to revise the outline I did (after finishing the first draft) so I can start the massive edit/rewrite for the second draft I need to get done. As I also mentioned the other day, I also need to start reading the books on the Anthony shortlist for Best Paperback Original, since I am moderating that panel at Bouchercon this year. To jog your memory, those books are, as follows: The Day I Died by Lori Rader-Day; Bad Boy Boogie by Thomas Pluck; Uncorking a Lie by Nadine Nettman; What We Reckon by Eryk Pruitt; and Cast the First Stone by James Ziskin. I got some good reading ahead of me, don’t I? Yes I do!

Huzzah! This is, after all, always a good thing.

I am, alas, as always, behind on my writing schedule. I had wanted to get Scotty finished this month (ha!) before embarking on an a project that will consume August and September; and then I had wanted to work on the WIP in October and November before starting on Bury Me in Satin in December. I don’t see that happening now, alas, since I got so little done on Scotty this month. Then again, you never know. If I can maintain good sleeping habits and maintain meeting goals and staying motivated every day in the face of the oppressive heat of a New Orleans August, I just might be able to get back on schedule.

I did finished reading Jessica Knoll’s The Favorite Sister this week. 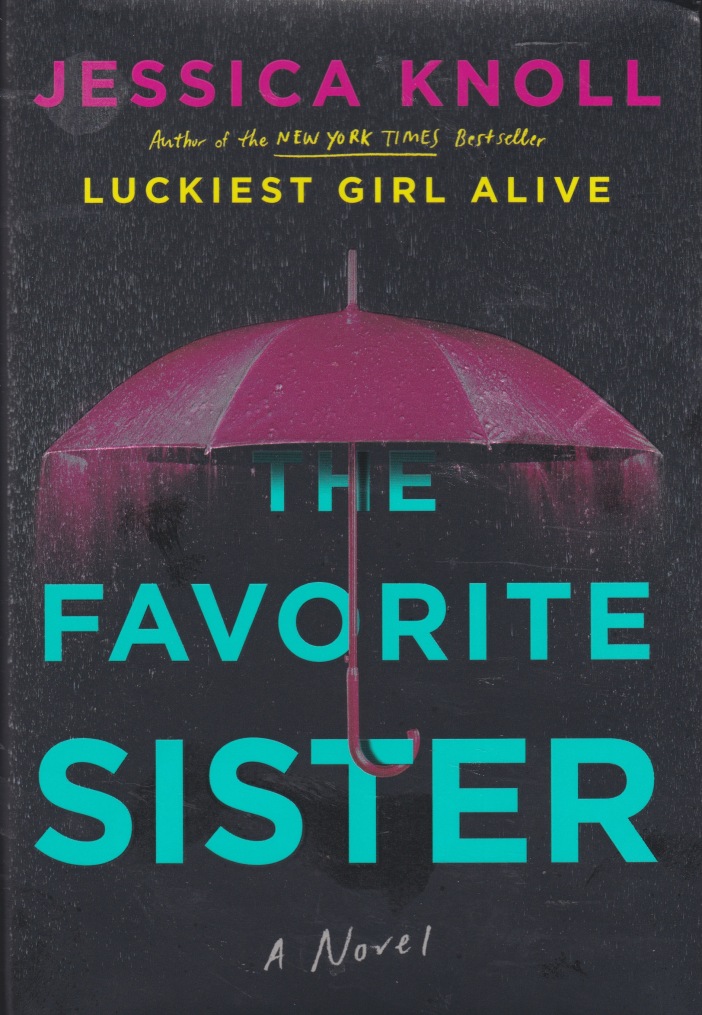 A man whose name I do not know slides his hand under the hem of my new blouse, connecting the cable to the lavalier mic clipped to my collar. He asks me to say something–sound check–and for a single reckless beat, I consider the truth. Brett is dead and I’m not innocent.

The sound guy listens to the playback. “Keep your hair off your left shoulder as much as you can,” he tells me.  I haven’t had my ends trimmed in months, and not because my grief has bested my vanity. I’m hoping viewers are better able to see the resemblance to my sister. I have nice hair. Brett had beautiful hair.

“Thanks,” I reply, wishing I could remember his name. Brett would have known it. She made a point of being on a first-name basis with the crew–from the gaffer to the ever-rotating harem of production assistants. My sister’s speciality was making underappreciated people feel appreciated. It’s a testament to that quality that we are all gathered here today, some of us prepared to tell heroic lies about her.

This is Knoll’s second novel; her first, Luckiest Girl Alive, was stunningly brilliant and I loved it. I also believe she may have made the Edgar shortlist for Best First Novel. In this book, Knoll again takes as her theme ambitious women and the conflicts they have with each other, set against the backdrop of a reality television series which is clearly based, in some ways, on the Real Housewives shows. The show, Goal Diggers of New York, ostensibly focuses on five women who are all entrepreneurs, don’t have kids, and in most cases are also single. Goal Diggers has the same pedigree as the Real Housewives shows; originally intended as a docu-series focusing on real women and the struggles they have running businesses and so forth, it has descended into a ratings-hungry juggernaut predicated on pitting the women against each other emotionally and forcing them into feuds. The ultimate cleverness of the book is it follows, basically, the same trajectory as if it were, indeed, a reality show about women; it reads like a season of a Real Housewives franchise. There are three main point-of-view characters–sisters Kelly and Brett, and Brett’s former best friend, an author of color named Stephanie. Kelly narrates the action in the present, after all the events of the book are finished–the device used is her filming what is known as a ‘talking head’ interview; where the camera is trained on the cast member and asked questions. The rest of the book is about the filming of the most recent season of Goal Diggers, which ended in tragedy; that is shown from the alternating POV’s of Brett and Stephanie, who manufactured a feud for the season as a storyline but the ‘fake feud’ actually runs far deeper, with a far worse betrayal at its heart, than anything that was taped for the series. The book addresses a lot of current hot topics in our culture and society: racism, homophobia, same-sex marriage, sexism. It’s very hard to talk about the book without giving spoilers; like a season of a reality show, the twists and turns the plot takes are part of the joy the reader gets from the story, and to discuss them would spoil it for new readers. But it’s very well-written, and the characterizations are quite strong.

I have to say, I enjoyed every second of reading this book, and I can’t wait for Knoll’s next one.