So, today I am very pleased to announce that my short story, “This Town”–which I’ve shared the opening to with you already, Constant Reader, will be published in the Murder-a-Go-Go’s anthology, edited by Holly West! Watch this space for more news about the anthology as publication date approaches! 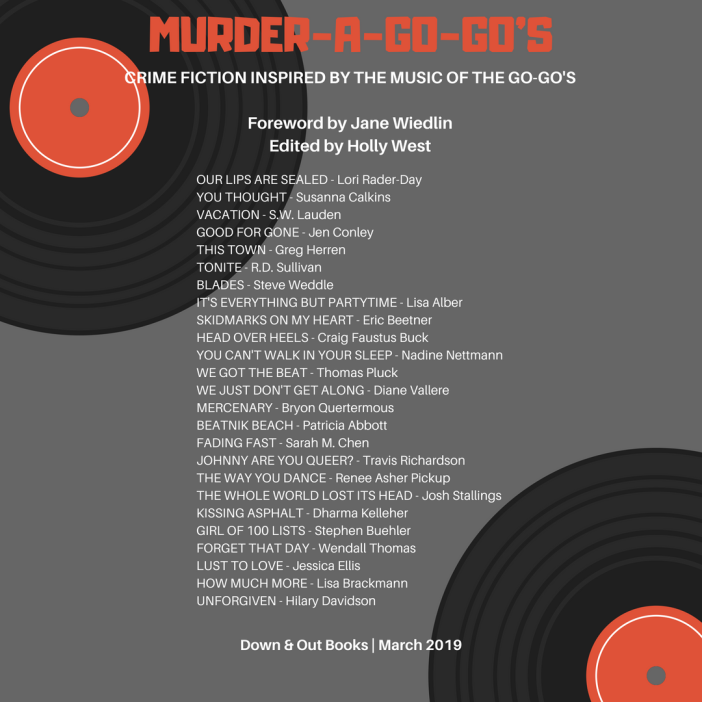 Pretty cool, huh? I’ve loved the Go-Go’s for going on nearly forty years now, and so it’s kind of cool to be in anthology of crime stories inspired by their music. And editors–if you ever do such a volume based on the music of Fleetwood Mac and don’t include me, I can’t be held legally responsible for what happens. Just sayin’.

And so many awesome people to share the pages of the anthology with!

So, yesterday I continued to work on revising the WIP and shifting the POV/tense, which isn’t as easy as it may appear on its face; it’s very easy to miss instances where past tense is used and needs to be switched to present. It’s also an excellent exercise for me, anyway, because I almost always use the past tense in my writing. (I think I’ve maybe used the present tense once, in a short story.) I also realized another short story I’m working on–“Burning Crosses”–would work better in the present tense, so I revised it into the present tense and revised it as well. I think it’s ready to be read aloud this weekend, which is pretty flippin’ cool.

And one more tweak, and my short story collection is ready to be turned in to my  publisher. Huzzah!

Alix Martin stood leaning over the small rustic gate, watching the retreating figure of her husband, as he walked down the road in the direction of the village.

Presently he turned around a bend and was lost to sight, but Alix still stayed in the same position, absent-mindedly smoothing a lock of the rich brown hair which had blown across her face, her eyes far-away and dreamy.  Alix Martin was not beautiful, nor even, strictly speaking, pretty. But her face, the face of a woman no longer in her first youth, was irradiated and softened until her former colleagues of the old office days would hardly have recognized her. Miss Alix King has been a trim business-like young woman, efficient, slightly brusque in manner, obviously capable and matter-of-fact.

I loved this story when I first read it, when I was either eleven or twelve; it’s a classic domestic suspense tale: young married couple lives in a remote location, they married very quickly after meeting–after the woman inherited some money–and, in fact, she’d been rather in love with someone else but her husband just swept her off her feet. This day, after her husband goes off, she has a chat with her gardener…who mentions that he’d come early (on a Wednesday rather than his usual Friday) because he wanted to ask her about the garden trim “and since they were going off to London the next day” (sic) he wanted to check with her before she left. She laughs, and responds that they aren’t going to London; but he is insistent that her husband had told her that. He then also mentions that the former owner of the cottage, which they bought for three thousand pounds, had only wanted two. As she put up two to her husband’s one…she’s certain he must be mistaken. But in a masterpiece of paranoia and psychological suspense, Alix then begins to wonder, and starts putting together the errant pieces of strange behavior from her husband–each individual instance nothing, but when put together make it very much seem like he married her for her money and is planning to kill her…and she keeps finding more and more evidence to convince her she is right.

And the ending is stunningly perfect.

Christie, such a master of suspense and crime!