Nostalgia is something I rarely indulge in, because I consider it to be dangerous in its apparent innocence. We tend to look back at the past with a rosier glow; see it through cheesecloth and Vaseline smeared on the lens to take away the wrinkles and ugliness, make it seem prettier than it actually was.  My childhood actually ended when I was thirty-three and decided to live my life rather than continue to allow it to just happen; the events of my life prior to that influenced me and helped make me into the person I am today, so I cannot have any regrets or ‘what-ifs’; I love my life now and I like who I am. I try to live in the present and look ahead; plans and goals are helpful to keep one focused, but they also leave one at the mercy of whimsical fate. You never know, for example, when a hurricane is going to come to your city or a wildfire burn down your home and your plans turn out to be for naught; we are all at the mercy of nature and fate.

Nostalgia perhaps explains my love for the Star Wars films; the first film opened when I was a senior in high school, and I have been a fan ever since. I waited in line for three hours to see the very first showing of Return of the Jedi when it opened; the prequel trilogy was a sore disappointment to me. Yet The Force Awakens and Rogue One tapped into that magic I remembered as a teenager, looking up at the big screen and seeing an epic tale of magic and mystery, the battle between good and evil, between freedom and authoritarianism, play out with space ships and droids and light sabers, with heroes and villains that were easily identifiable, and American cinema, for good or bad, was changed forever.

Yesterday Paul and I went to see The Last Jedi. 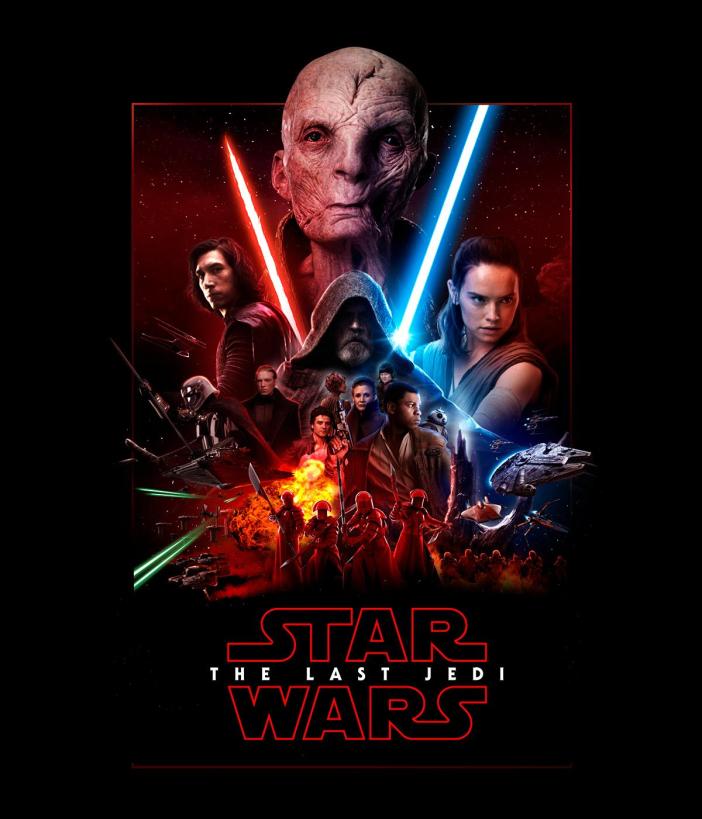 There are spoilers hidden behind the ‘more’ cut, so don’t say you weren’t warned.

When I saw The Force Awakens, it was clear to me that the new trilogy, or at the very least, the new film, was mirroring the original. Just like what is now called A New Hope (which is a lousy title and that movie will always just be Star Wars to me; but I bow to the creators and publicly refer to it as A New Hope), we were introduced to three characters who carry the brunt of the story on their shoulders: Poe Dameron, a resistance pilot and maybe the best in the galaxy; Finn, a storm trooper for the First Order (which stands in for the Empire in this trilogy) who has broken his conditioning and escapes and has to learn how to be a hero; and Rey, who salvages wreckage to make a living. All three characters were well drawn and well acted, played by appealing young actors, and the film itself was pretty terrific in my opinion. Supreme Commander Snoke stood in for the Emperor, and young Kylo Ren was the stand-in for Darth Vader, and over all, as I said, I greatly enjoyed the return to form of the series.

(In defense of the prequel trilogy, which I didn’t enjoy and have watched again several times trying to understand the convoluted plot, I will say this: with the original trilogy, it was fairly apparent the Rebellion would be successful, but we didn’t know how it would happen, nor did we know whether Darth Vader could, in fact, be redeemed. There was none of this suspense with the prequels: we couldn’t get invested in Anakin because we knew he would turn to the dark side; we knew the Republic would fall and be replaced by the Empire, we knew the Jedi would be slaughtered, and we could be reasonably certain that Padme was going to die. This eradicated any suspense in the telling of the story, and prevented any emotional investment by the audience no matter how well acted or developed the characters were. So, Hayden Christensen’s bad performance at Anakin, which is often blamed for the prequels’ flaws, can’t really be held to blame for the lack of emotional investment in the films on the audience’s part; we knew how the trilogy had to end. This is why it never made sense to me that these films were made in the first place.)

I also wasn’t prepared for how emotionally difficult seeing Carrie Fisher’s scenes would be for me. After Han Solo was killed in The Force Awakens, and the name of this film was announced as The Last Jedi, I realized that the three main characters from the original trilogy were not likely to survive this trilogy; Han died in the first, Luke would die in the second, and Leia would die in the third, completing the cycle and the symbolic passing of the torch to the new generation. Carrie Fisher’s death after shooting this film made me wonder, and hope, that Luke might survive to the third film…but no, the originals are now all gone. Knowing she was dead in real life and couldn’t do the next film made Luke’s sacrifice at the end, of his own life to keep the Resistance alive, all that much more powerful. It literally felt like a body blow.

And in the film’s final scene…there was the possibility of the next generation of the trio shown…the second film of this trilogy did not, in fact, mirror The Empire Strikes Back. That film was dark and had a still darker ending; everything in flux, the stage set for the grand finale. This film instead ended with hope; that although the Resistance was almost completely wiped out, the spark was lit for the torch that would eventually light the entire galaxy. The twists in the plot were all the more surprising because I was expecting this trilogy to mirror the first; the way The Force Awakens mirrored A New Hope, and it doesn’t. It reinvigorated the series completely, and was more than a pleasant surprise. I also think the characters are better developed than the originals, and the additions to the cast in this film–Rose in particular–were amazing.

I can’t wait to see how it all ends.