I didn’t get as much done as I wanted to this weekend–do I ever?–and now it’s Monday morning. Ah, well, ’tis life, isn’t it? We have friends coming in this week–we’re having brunch Saturday at Commander’s–and I’m not sure what other opportunities we’ll have to see them this week.

I did manage to finish reading Donna Andrews’ latest, Gone Gull, over the course of the weekend, which was fun. 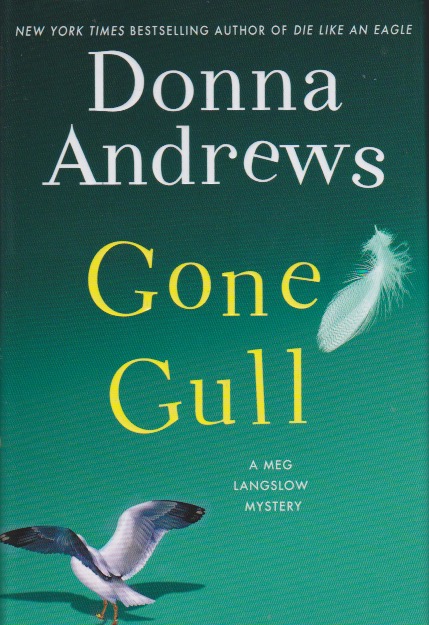 “Wow, you could kill someone with that thing! Doesn’t that worry you?”

I counted to ten before looking up from the anvil, where I’d been about to start hammering on an iron rod. I’d only finished heating the iron to the perfect temperature for shaping it. If I was working in my own barn, I’d have ignored Victor Winter’s remarks.

But I wasn’t in my own barn. I was at the Biscuit Mountain Craft Center being paid–quite handsomely–to teach Blacksmithing 101. And however annoying I found Victor, he was a student. If ignored, he’d start muttering again about complaining to management. I didn’t want him doing that. Management was my grandmother Cordelia, owner of the center, and I didn’t think she needed the aggravation today.

So when I’d reached ten I put my hammer down, set the rod safely on the anvil, and pushed up my safety goggles. Then I smiled, and did what I could to turn his question into a teaching moment.

“Yes, Victor,” I began. “You could kill someone with this metal rod–even if it wasn’t heated to its present temperature of approximately a thousand degrees Fahrenheit.”

I love the Meg Langslow series, and eagerly await each new volume (there’s another one coming out in October, The Finch That Stole Christmas, huzzah! The Christmas ones–there are two already–are amongst my favorites).  Meg is, as you can guess from the above opening, a highly skilled and trained blacksmith; if I had any complaint to make about the series, it’s that Meg’s blacksmithing has taken a backseat to all of the many other things she somehow manages to do. This book is also not set in the small college town of Caerphilly, Virginia (I pronounce it carefully, because it makes me laugh), but rather in the Blue Ridge mountains, where Meg’s long lost grandmother (introduced in The Good, the Bad, and the Emus, another favorite) lives. (Although I do miss Caerphilly, but I am hopeful the October release will be set there.) Meg has an enormous family, a wry sense of humor, and is uber-organized, which is why she also ends up running so many, many things–almost all of which result in someone being murdered and Meg having to use her highly honed organization and deduction skills to catch a killer.

The premise of every  cozy series, of course, is that the main character manages to catch the killer before the police do; this is a very difficult thing to pull off, and Andrews does it every single time. The books are witty, and clever, and I don’t think I’ve ever even tried to figure out who the killer is, or solve the crime (which is something I tend to do whenever I read a crime novel) because I am enjoying the ride so much.

Gone Gull is a fine addition to a series that I hope Andrews never grows tired of writing, because I’ll keep buying and reading as long as she does.