I’ve been, over the course of the last week, rereading Les Liaisons Dangereuses by Choderlos de Laclos; originally published in 1782 as the sun set on the absolute Bourbon monarchy. My interest and curiosity in the novel had been piqued by watching the two competing film versions of the same story that had come out in the same time period; the more famous Dangerous Liaisons and the overshadowed Valmont. The book had been adapted into a quite successful play; the play was the basis for the former film while the book served as the template for the latter–the director, Milos Forman, had been intrigued by the play but the rights had already gone; the book, however was in the public domain and he was determined to film his story. Even now, I wonder about the wisdom of his decision and his financial backers. Dangerous Liaisons wound up being an enormous hit and was nominated for a boatload of Oscars; his film came out second and was mostly overlooked. I preferred Valmont at the time, for reasons I shall explain; but on reviewing the films it is clearly the inferior of the two. 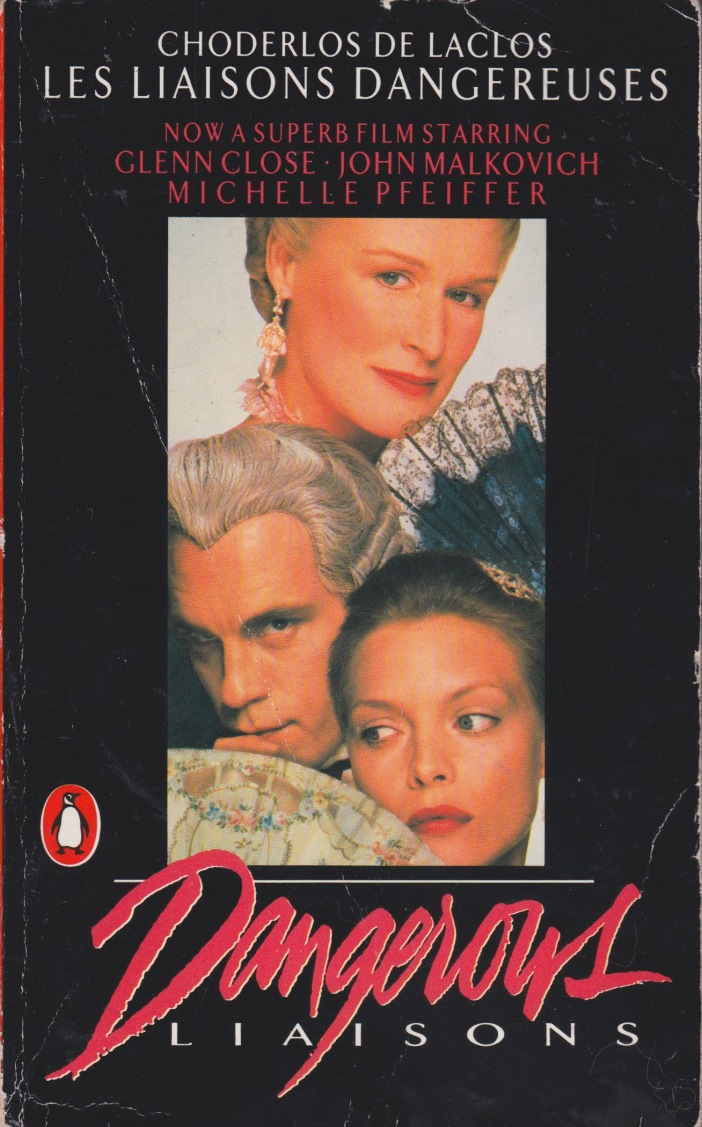 The story itself has always, always, fascinated me; it is incredibly dark, and rather on the noir side. Madame de Merteuil, a widow (her title is actually Marquise), is angry because her lover, the Comte de Gercourt, has left her to become affianced to her young cousin Cecile Volanges; a fifteen year old innocent who has been living and being educated in a convent. It is this innocence that Gercourt is attracted to; and as an affianced husband he no longer requires a mistress. The Marquise’ jealousy is, of course, primarily motivated by ego; men do not leave her. So she concocts a scheme to despoil the innocence of young Cecile, and wants to enlist her dear friend, the Vicomte de Valmont, to seduce the girl and turn her into a wanton so that on her wedding night Gercourt would not only be disappointed but humiliated; she also thinks Valmont will help her because in the past, Gercourt had seduced a mistress of Valmont’s. But seducing a virgin isn’t the kind of challenge a practiced roué as Valmont; his interest lies in seducing Madame de Tourvel, a deeply religious and devoted wife whose husband is away on business, nor does he particularly feel the need for revenge against Gercourt. So the Marquise instead has to find another method of having the young girl seduced, and the story goes from there.

I love the book. It’s extraordinary; and it is an epistolary novel, told and advanced through the letters of everyone involved in this game of seduction and the corruption of innocence and virtue. The reader is thus able to engage with each player, and Laclos is able to create each character and their voice distinctly. It’s also a fascinating character study; as the Vicomte and the Marquise explain to each other each step in their game–eventually leading to a bet between the two; if Valmont is somehow able to accomplish his seduction of Tourvel, the Marquise will be his for one night. But also, we see Tourvel’s letters to the Vicomte as she tries to resist him; her letters to friends where she talks about the struggle in her own soul between virtue and sin. We see Cecile’s letters to her friend Sophie, back in the convent, as her own innocence and childhood is slowly taken away from her as she is first excited and scared at the thought of her impending marriage; her innocent, almost childlike love for her music instructor, the Chevalier Danceny (whom the Marquise, having failed at getting Valmont to seduce Cecile, targets to be Cecile’s despoiler), and then her ultimate education into sensuality by Valmont (who finally does seduce Cecile and take her as his mistress to revenge himself on her mother, who has written disparagingly about him to Tourvel and thus hindered his seduction of her). The letters between the Marquise and Valmont also reveal how they became the way they are; their own brief affair which ended when they recognized in each other another such as themselves and decided to be friends and allies instead, and the ultimate game they are actually playing with each other.

The original film, with Glenn Close and John Malkovich in the leads, with Michelle Pfeiffer as Tourvel, Uma Thurman as Cecile, Keanu Reeves as Danceny, and Swoosie Kurtz as Cecile’s mother Madame de Volanges, was very sumptuously filmed; gorgeous sets and costumes and cinematography. But I was repelled by it when I watched it; I couldn’t really believe either Close or Malkovich as these master seducers–although I readily believed them as manipulators. The film itself seemed incredibly cold and dark to me. I much preferred Valmont; with Colin Firth and Annette Bening in the roles, with Meg Tilly as Tourvel, Fairuza Balk as Cecile, Henry Thomas (from E.T. now a young man) as Danceny, and the amazing Sian Phillips as Cecile’s mother. The backstory is set up better–we see Gercourt dumping the Marquise brutally, for example, and Bening and Firth are just so luminously beautiful it was easier to believe they’d be able to seduce pretty much anyone.

I read the book after seeing the films; I’ve reread it several times, and after rereading it this last time and rewatching the movies, I am not ashamed to say that I was wrong originally. <I>Dangerous Liaisons</I> is more true to the book as it was written; that coldness, the dark viciousness at the heart of the novel drives that movie far more than it does <I>Valmont</i>; the main characters aren’t quite as dark and nasty and chilling in the second version; she’s simply a woman scorned and he’s just kind of a dick. That sense of evil entitlement that Close and Malkovich embraced and played to the hilt; that seductive sleaziness just isn’t there.

And I now prefer the first film.

It was adapted yet again in the late 1990’s as Cruel Intentions and updated to the world of a modern day prep school and filthy rich kids, with beautiful Ryan Philippe and Sarah Michelle Gellar in the leads as step-siblings, Reese Witherspoon in the Tourvel role as a young girl who’s kind of became the spokesperson for modern virtue and virginity pledges, and Selma Blair as Cecile; whom Catherine’s latest boyfriend has left her for. It takes place over the summer between semesters–and the motivation for Gellar as Catherine to have Cecile seduced, and the reason her boyfriend leaves her for Cecile, doesn’t really play as well. (In an interesting aside, Swoosie Kurtz appears early in the movie as Sebastian’s–the modern day Vicomte–therapist whose daughter he seduces. The darkness at the heart of the story is there in this adaptation, making it even darker as it is about cynical teenagers/high school students. I intend to watch it again; I’ll probably talk about it here once I do.