Friday night I also managed to read another book, a young adult novel by Jennifer Mathieu, and it was a most auspicious debut, The Truth About Alice.

It was actually much better than I thought it would be. 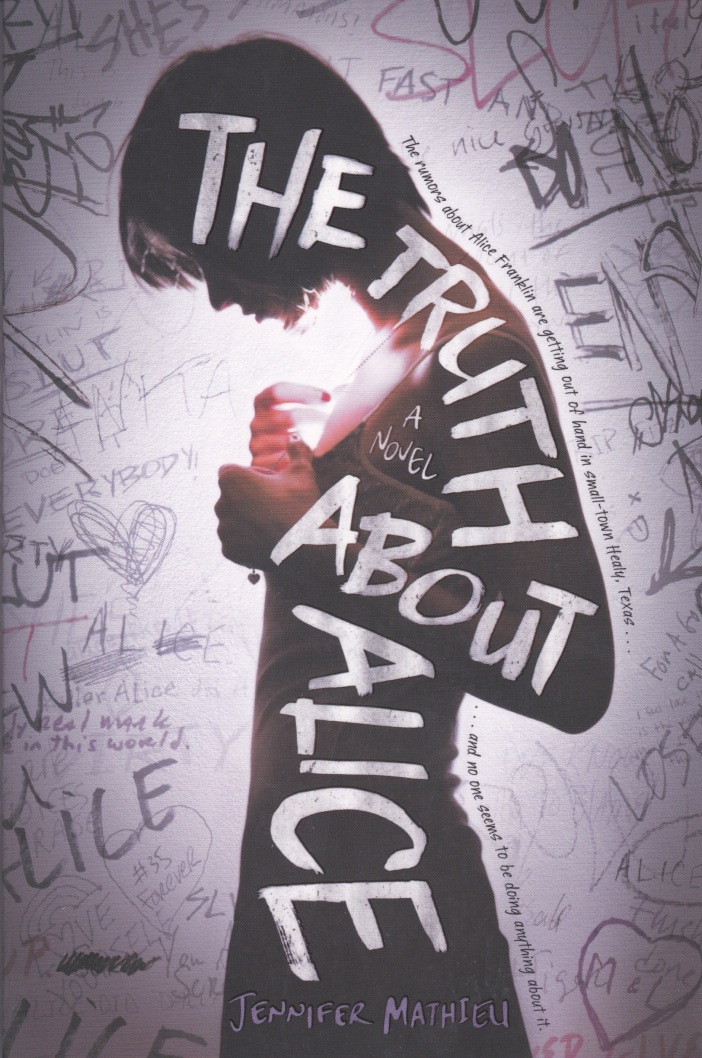 I, Elaine O’Dea, am going to tell you two definite, absolute, indisputable truths.

1. Alice Franklin slept with two guys in the very same night in a bed IN MY HOUSE this past summer, just before the start of junior year. She slept with one and then, like five minutes later, she slept with the other one. Seriously. And everybody knows about it.

2. Two weeks ago–just after Homecoming–one of those guys, Brandon Fitzsimmons (who was crazy super popular and gorgeous and who yours truly messed around with more than once) died in a car accident. And it was all Alice’s fault.

The focus of the book is the story of Alice Franklin, and what she may or may not have done. It’s also the story of how rumors can take on lives of their own, and how they can destroy a person’s reputation and, untimately, their life.

The book is also written in a very clever way; it’s told from multiple first person points of view, so we see the story of Alice as told by some of the kids who know her. This is a difficult feat for an author to pull off, since the voices have to be unique and distinct, but Mathieu managed this very well. She also managed to capture what it’s like to be a teenager.

Before the rumor gets started about Alice’s behavior at Elaine’s party gets started, Alice is relatively popular. She’s pretty, she’s smart, and everyone likes her. Once the rumor starts going around, though, obviously her popularity begins to drop…and then once the story gets out about Alice sexting Brandon while he was driving–drunk, by the way–she is finished in Healey, Texas, the small town where they all live, and she is finished at Healey High. She is ostracized, no one will speak to her, and she loses all of her friends.

In addition to Elaine, the other viewpoint characters are Kelsie, who was Alice’s best friend before all of this got started; Josh, Brandon’s best friend and a fellow football player, who was in the car when the accident happened; and Kurt, the nerdy genius boy who has no friends but doesn’t seem to care because he is really smart, an orphan living with his grandmother, and is kind of socially awkward. He helped Alice once with a math problem, and she was very kind to him…and he remembers how kind she was. He also is kind of in love with her, because she’s perfect and beautiful and kind…and he has observed her “totally in a not-stalker way” for several years. Alice was Kelsie’s first friend when she moved to Healey, and back where she was from, Kelsie was considered a weirdo and had no friends; so she loves being sort of popular. Once the rumors start, Kelsie is invited to become a part of Elaine’s crowd, the most popular kids in Healey–but to do so, she has to jettison Alice. Not wanting to become the friendless kid again, she turns on her former best friend and moves forward with her friends; even starting an even worse rumor about Alice. Josh also regrets blaming Alice for the accident, and it’s never clear why he does in the first place–until later, and then his own guilt and shame also make a lot more sense. Mathieu didn’t quite take the story as far as I thought she was going to–and I think it would have been stronger if she had, frankly, instead of just hinting at it–but it’s still powerful.

Kurt also offers to help Alice with math again, and the two of them start an unlikely friendship as well.

It’s told very well, as I said, and the truths and come-uppances, when they come, might not be as strong as I would have liked them to be, but they were a lot more realistic in their smallness, and satisfying enough. I really enjoyed the book, and will add Mathieu’s other two novels to my TBR pile.

It also made me think about one of my own works-in-progress…and how to make it better. Well done!