The regular season came to an end for LSU last night with a 45-21 win over Texas A&M, and I am going to miss the seniors and the guys the team will lose to the NFL draft. It’s been a pleasure watching you all play for the last few years. I also want to shout out to Danny Etling, who has never really gotten the kind of respect he earned over the last two seasons. He’s not Eli Manning, but he was a cool, competent quarterback who made some big plays and only threw two interceptions this entire season. That’s pretty amazing. And considering where the team was at one point, it’s no disgrace to take pride in how they closed out the season, winning six of their last seven games–including a win over Auburn, who went on to win the West division spot in the conference championship game by beating Alabama yesterday–the second CFS Number One team they defeated in three weeks.

I also continued working on the Scotty Bible yesterday–found some discrepancies that may not be able to be corrected, at least maybe not right away–but the ones I can’t correct are easily explained away; and I can correct things like the fact that Storm apparently had children in the first two books that completely vanished from the series later. Oops. (I’m not sure if they disappeared or just were never mentioned again; I don’t think I ever said Storm didn’t have children; I just never mentioned them, and that is kind of weird, really; why wouldn’t Scotty or his parents ever talk about his nieces and nephews? Although it might be kind of fun to bring them into the story at some point….hmmmm. Also, I mentioned in one book that Frank’s parents lived in Chicago and then in a later one that they were dead. I think I can correct that in the earlier book; let’s hope.

Obviously, I should have done this years ago.

But I have only one more book to go through–Garden District Gothic–which is incredibly exciting, and then I can create the Scotty Bible, which….is not so incredibly exciting. Ah, well. I have a lot to do today, so it’s probably best to get to it.

Here’s how it looks so far: 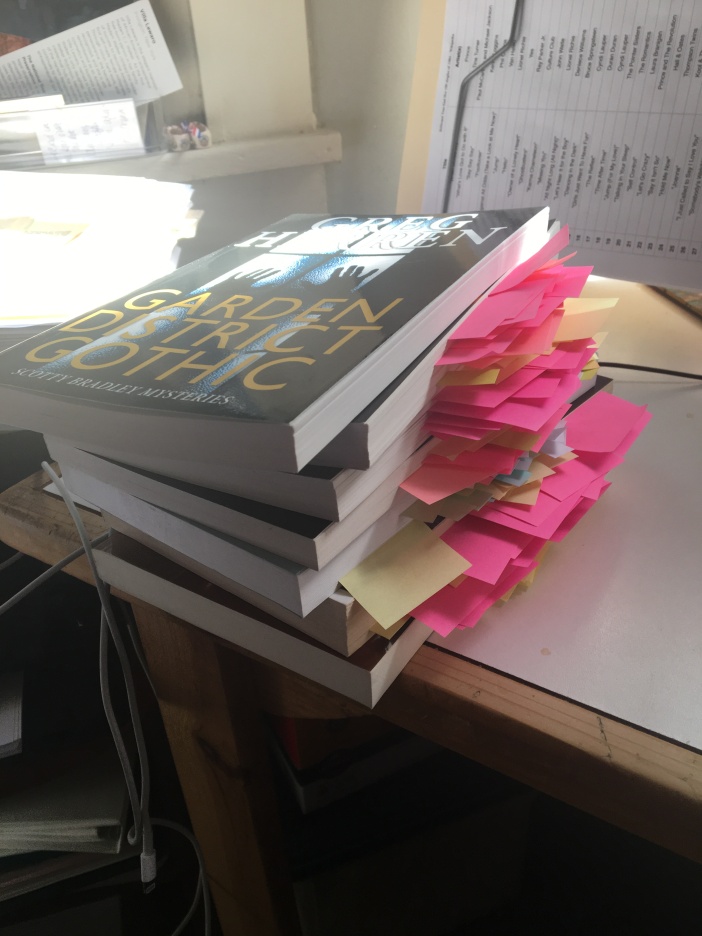 One thought on “Break My Stride”