Good morning! ‘Tis Sunday in the Lost Apartment, and Paul is still asleep. I’m on my second cup of coffee, and my back is a little sore. I’m also dehydrated; which means I’m going to have to guzzle down water at some point–probably when I’m finished with coffee for the day. We’re supposed to meet some friends down in the Quarter later on this afternoon; so hydration is going to be key.

We went to the LSU-BYU game last night in the Superdome, relocated from Texas because, well, in case you aren’t aware of it, there’s been a major flooding issue in Houston thanks to that rat-bastard Hurricane Harvey. It was the first time we’ve been to an LSU game outside of Tiger Stadium, which also felt kind of weird; it was also weird to go to an LSU game we could have to and from. The game wasn’t sold out; the tickets only went on sale Wednesday and of course, being Labor Day people probably already had made plans, weren’t planning on going to Houston for the game. Still, there were about 53,000 people or so in the Dome–which gets really loud–and I’d say probably about 90% of the people in attendance were LSU fans. (Reading a write-up on the game from the Salt Lake newspaper this morning, I laughed when the reporter said Apparently there’s a side split canyon to Death Valley in New Orleans.  So, while the crowd was partisan Tiger fans primarily it still wasn’t a home game and that seemed weird when you’re used to Tiger Stadium. They also had the Dome at an arctic climate so I was cold, and by the fourth quarter I had goosebumps from the cold that wouldn’t go away. All the reports I read of the game was that it was a dominating performance by LSU, and it kind of was; the defense smothered the Cougar offense which never crossed the fifty yard line, and limited them to maybe four or five, at most, first downs. They also got an amazing interception that was just beautifully played. The LSU offense was…well, it got the job done but wasn’t particularly exciting other than a long pass from Danny Etling that set up the second LSU touchdown in the second quarter after the interception. (LSU scored two touchdowns quickly; after an initial drive, they kicked off and on BYU’s first play after that came the interception.) But we also missed a field goal, and didn’t make a 4th and 1 from the one-yard line.

I’m not sure how confident I am that this is going to be a great season. But it’ll be fun to watch–it always is–and there were some terrific plays in the game last night. Afterward Paul and I walked home from the Superdome. We got home shortly after midnight, and I read for a while before going to bed.

This morning, I’m going to relax and rest and gird my loi 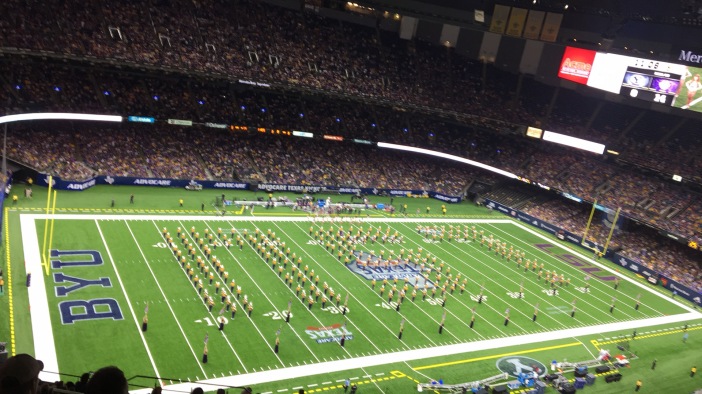 s for going down to the Quarter. I still have tomorrow off–my back is a little sore from doing Outreach last night and the walking last night–so hopefully tomorrow I can sleep in, get some good rest, let my back stop hurting, and get some writing down. I’ll probably try to get Chapter 4 finished today, and maybe even start Chapter 5. We shall see.

And here’s a nice shot of the Tiger band from last night.