One of the most enjoyable developments of the last ten years or so (maybe longer) has been the resurgence of horror television. I am not knowledgeable enough about the television history–I don’t really pay nearly as much attention to the entertainment industry as I used to; and I often find shows long after everyone else does. My memory, which used to be sharp as a razor, is quite a bit duller than it used to be. The embrace of horror themes and stories by television networks is something I endorse (crime has long been a mainstay of the networks); I am greatly enjoying The Exorcist, gave up on both Scream and Scream Queens during their first seasons, never finished watching Damien (which was cancelled after season one)…and then there’s American Horror Story.

To be honest, I have a love/hate relationship with the show.

Paul and I are both huge fans of Jessica Lange, so we were tempted to watch for that reason; we both enjoy horror (Paul was the one who got me to watch not only the Halloween movies but the Scream ones as well). But we rarely watch television when it airs; our schedules don’t permit us to watch things regularly week by week. For years we simply waited for them to come on to Netflix and then would binge-watch; it was before Season 2, Asylum, began airing that I got a DVR so we could record the shows–back in the days of VCR’s we used to record shows all the time. So, as Asylum aired, we were also watching Murder House from Netflix on disc at the same time.

The acting was fantastic; Jessica Lange was, as always, amazing. But my biggest fear about the show–Ryan Murphy as show-runner–too often proved to be true. It has been my experience that Murphy is a great ideas guy, but those ideas don’t often pan out into a long-term running show; Glee being the classic example. But I thought the anthology nature of this show–each season being a self-contained story, and using an ensemble cast–might work. Murder House was terrific, and of all the seasons, the most cohesive in terms of story-telling. Asylum was all over the place; after an amazing beginning in which Adam Levine died in a most horrible fashion, the show seemed more concerned with cramming in as many horror tropes as possible within the season: Aliens! Serial killers! Nazis! Biological experiments creating bizarre things! Demonic possession! And on and on and on. Paul and I soon lost track of the story and were just watching for the acting. We never did watch the season finale. But it did give us the wonder that was Jessica Lange singing “The Name Game”; Lily Rabe’s brilliance as the possessed nun; and Sarah Paulsen, after playing a small part in season one, getting a chance to truly exercise her acting ability as Lana, the reporter who winds up involuntarily committed.

My favorite season, though, is Coven.

It was set in New Orleans, for one thing, and beautifully shot; it was almost a New Orleans travelogue. Kathy Bates was added to the cast, as was Angela Bassett; it was about witchcraft and a school for witches…and one of the girls was obsessed with Stevie Nicks, who even made two guest appearances on the show, but her music threaded through the entire season. 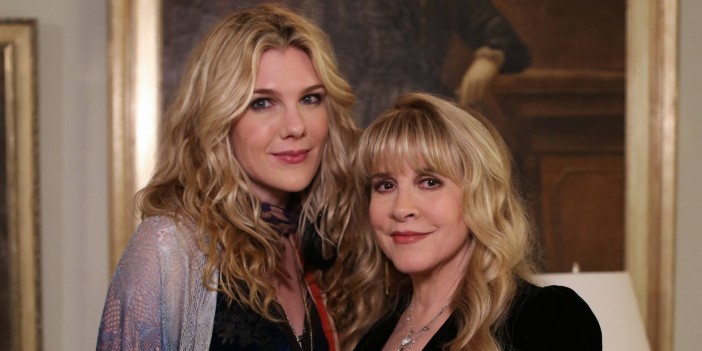 Miss Robicheaux’ School for Girls was even in my neighborhood.

But again, the writing was incredibly uneven and often times the story didn’t make any sense. The acting was terrific, though, and the visuals absolutely stunning. I even wrote a piece about how watching Coven for the Criminal Element website about how the show reminded me of why I fell in love with this crazy city in the first place.

The <i>Freak Show</i> season was again unevenly written, and this time the acting–the way the characters were written and so forth, wasn’t strong enough to really carry the show. It was also filmed here, with New Orleans standing in for Jupiter, Florida; the Mott mansion, for example, was Longue Vue. And Hotel was such a mess that we didn’t ever watch the season finale, like Asylum. We are watching the new season, Roanoke, and were very close to stopping watching until the big twist in episode 6–Murphy had hinted in interviews the show would flip, and so we decided to stick it out until then. But after the big flip–which was incredibly clever–it seems like the writing is going off the tracks again.

There have been amazing moments on the show, though.

I am curious to see where this season goes.