Day two of the New Year, and it’s still miserably cold here in New Orleans. This cold spell is supposed to last through the weekend, but next week the range will be between the high forties and mid-sixties, which is more normal for New Orleans winter. The lovely thing about this cold snap is that I am sleeping magnificently; the problem is I don’t want to get out of the bed in the morning.

This weekend is Comic Con here in New Orleans; I am speaking on two panels and I am doing a signing; the panels are on Friday and Saturday and the signing is Sunday afternoon. While it’s kind of a drag having to have something to do every day of my weekend, it is Comic Con, which is always fun. My favorite thing to do is walk around and look at the costumes, to be honest. Every year I promise myself that next year I’ll wear a costume; and when it rolls around every year I am not physically costume ready. But one of my life-goals is to wear a costume to Comic Con one year; maybe if I stick to my gym goals this year I’ll be able to do so next year.

The journal is working out great so far; I did some more brainstorming in it yesterday, and the WIP is really starting to take shape–a better shape than it was. It’s strange, but thinking things through, hashing them out on paper and writing them down makes the process work better for me. I can’t believe I’ve not been doing the journal thing for so long. I’ve really come up with some good stuff over the last few days since buying it. I am quite excited about this new development, and am getting quite excited about writing again; which, to be honest, it’s been kind of a while since I’ve felt the creative joy of writing.

I also started reading several books over the weekend which didn’t pass the fifty-page test; so off into the donation pile they went. This isn’t to say the books were bad, they just didn’t grab me, and there are just too many books to keep trying to read something that hasn’t grabbed me by page fifty; that turns the reading into the category of pulling teeth and then I don’t read as quickly and then the books continue to stack up. One I put aside to try again at a later date; I really like the concept of it, but the writing just didn’t grab me and encourage me to keep going. I’m starting another one tonight; hopefully it will work out better.

I also didn’t read a short story yesterday; I started reading one, but Paul and I also started binge watching Broadchurch this weekend, and we are totally sucked into the show. The first season was truly wonderful; lots of twists and turns that i certainly didn’t see coming, which was lovely. We’re one or two episodes into Season 2 now; the addition of Charlotte Rampling and Jeanne Marie-Baptiste to the cast can only make it stronger. The acting in Season One was pretty spectacular, and I have to say, after The Night Manager and this, I’ve become rather a fan of Olivia Colman.

I have a lot of emails to get caught up on today, and I also want to get some writing done. The illness is mostly past; all the remains is a tubercular cough; deep and throaty and phlegmy, but at least it no longer hurts to cough. Baby steps.

And on that note, tis back to the spice mines with me. Here’s a hunk for you for today, Constant Reader. In honor of Comic Con, this is cosplay specialist Michael Hamm as Nightwing. 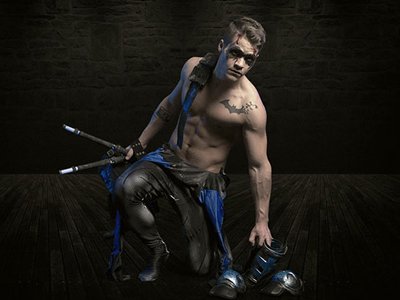 2 thoughts on “Come On Feel The Noise”